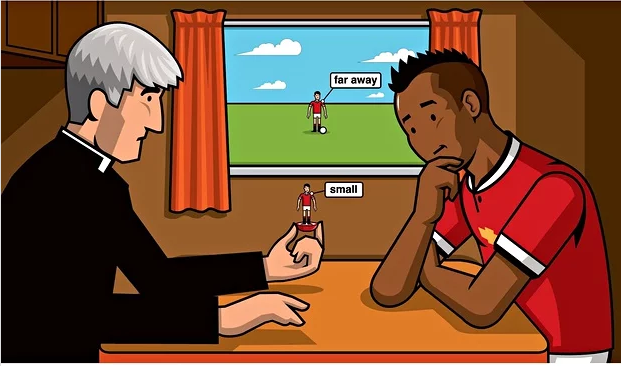 It’s one of my frequent irritations that when trawling through the football websites you’re constantly hit with football stories with the dreaded “5 things we learned about” or “10 things you need to know” prefixes. Usually in the Guardian. Now the BBC does it and I think I even saw it repeated in Torbay’s Herald Express the other day in an article about Torquay’s fading promotion hopes from the Vanarama Conference.

You may think it’s harmless. You may think I’m finding irritation when there’s nothing to grind a fairly adult mind. But it does. In my mind, it’s another case of lazy journalism cranking into life and handing “football analysis” down to the new generation in carefully worded bitesize pieces so that they can go about their weekly business armed with five talking points that, and this is the salient point, they are either too stupid to deduce for themselves or too lazy.

You’ll never hear me say that I’m an oracle of football knowledge but in my 39 years on this planet and 34 of them exposed to football (Torquay United, granted) then I like to that think I know enough to work things out for myself. I don’t feel that I have the need to get my football facts in 5 handy points or get a high brow opinion by having to endure another episode of Barney Ronay swallowing a dictionary and disappearing up his own backside trying to explain a simple game in the most condescending, ridiculous and smart arse manner possible. As an example this is a small snippet from Barney from last season when discussing David Moyes.

“It is of course a more nuanced succession, just as Moyes was only ever an illusory Fergie 2.0, a sentimental, oddly literal kind of continuity appointment. United may have been managed by Scots for 75 of the last 100 years (in an odd aside to all this, it seems fairly likely they will never be managed by one again), but Moyes was only ever the most flattering , rootsy Glasgow-centred kind of Ferguson-Busby facsimile.”

Nonsense isn’t it? I’d like to hear him utter those words in a pub in Manchester or Glasgow over a pint and a packet of pork scratchings with some hard looking bloke staring at him whilst feeding a Rottweiler nails. Some of the stuff written about Moyes last year I found shameful. Ok, so it didn’t work out for him. He’s not the first manager to try and make the step up to something better and fail, and he certainly won’t be the last. Roy Hodgson fares no better either. Both have been the subjects of intense media scrutiny who then provoke vilification on social media. Moyes is better off out of it in the lovely setting of San Sebastian rather than try holding out for a job with a decent sized Premier Club and then being asked every week why he failed at Old Trafford. Every week, without fail that is.

I think we’re in grave danger of missing out in the evolution of the proper football supporter. Traditionally your views are shaped by those of others in the know. After spending time going to games and then going to the pub to talk about football with people who knew what they were talking about then you soon found out which opinions you had of the game, or of football in general, were correct and which were completely ludicrous. Now we find that this middleman proving ground stage has been cut out the loop completely and supporters are just getting fed bullshit by commentators (both the vocal and written versions) who know no more than a tiny smidgen more than they do. We’ve gone from having to watch games at a ground, to going down the pub to talk about it and then seeing if you’re view of the game matched the local press in Monday night’s paper to people watching games, interactively tweeting bollocks about it and then getting their views from the “5 things nonsense”. Truly horrific. The problem is that the bollocks used to stay in the pub and get laughed at until the bollocks got turned into sense. Now it’s aired for all to see on Social Media because people are seeing little better coming from people who are paid to write about football.

Commentary of games on TV is also a cause of personal irritation. This was highlighted nicely, when as part of the 50th year of Match of the Day celebrations, Barry Davies was invited back to commentate on a game. What a breath of fresh air that was compared to the usual need for every modern day TV commentator to fill as many seconds up with carefully researched soundbites which mostly border on cringeworthy at best. “Harry Kane, he’s one of their own” was one I heard the other day and you got the sense that the commentator had kept that on reserve for a while. Cue a mini fist pump of joy in the production room no doubt. But it’s just a commentators way of “retweeting” the current Spurs wankfest over a promising young striker.

I’ve also been a bit perplexed by BBC’s coverage of the FA Cup this season. Like most people I was happy that it was coming back the BBC after being in retarded exile at ITV Sport who let’s face it are a complete disgrace to Television Production. But the BBC seem to be going down an odd route. It’s almost like someone has said “Right, our job is to re-market the FA Cup completely, lets tell everyone how great it is”. Nothing wrong with that you might say, but I think the message is getting lost a bit because they seem to be telling us what a wonderful competition it is at every opportunity. Like most things today the emphasis is on heaping superlatives on things that were long considered the norm. You would think that if the BBC really gave a shit about the FA Cup they would’ve shown the Bradford City V Sunderland game rather than play it safe with Villa V Leicester and get obsessed trying to find out how much an improved 2nd half performance was down to Tim Sherwood having his first meltdown in the Villa Park dressing rooms.

It looks like for the FA Cup upset they’ve decided to just show every Man Utd game when they play a smaller club. I watched the coverage from the Abbey Stadium as Cambridge United took on Louis Van Gaal’s stuttering Manchester United side. Cambridge parked the bus and Man United couldn’t find a way through. Rojo put in a meaty challenge on a lower league player and the Abbey Stadium was outraged. How many of them actually turn up every week I wonder? Michael Carrick was quizzed after the game, the interviewer did his level best to trip him up and admit Man United played poorly. Carrick stood firm and said “Well this is the FA Cup, Cambridge defended very well”. You could tell that the interviewer was choking back immense disappointment.

Interviewers have also been told, it seems, to have an obsession about whether a manager of a team losing at half time gave his team the “hairdryer” treatment. Sam Allardyce was asked this today and he replied with a deadpan “I told them to use the ball better”. Again disappointment. What were they expecting? Something akin to John Sitton calling one of his players “a little cunt” and another “a fackin’ big cunt”, picking a fight with the pair of them and inviting to bring their dinner as they’ll “fackin need it when he’s through with them”

When will it ever end? When the middle classes piss off back to Rugby Union?

One thought on “5 things we learned about the media dumbing down football.”