A Saturday last season saw me travel back up the M1 all the way to Huddersfield, via a small unsuccessful scouting trip to get a nice view of Hillsborough. I side-stepped neatly past last week’s destination (Hepworth), just dipped into Holmfirth before taking the scenic route over the top from Brockholes to Farnley Tyas before reaching the tower at Castle Hill and dropping down into Huddersfield. You get a great view from Castle Hill of the surrounding area.

So destination for the day was Newsome FC to watch their seconds take on Berry Brow (2nd in the table) in the Huddersfield and District Association Football League 1st Division. The first team were playing away at Featherstone Colliery (In the West Yorkshire Association Football League) and their thirds were at home (in nearby Farnley Tyas) to Holmbridge Reserves. Holmbridge 1sts beat Newsome 7-0 last week when I was about 3 miles down the road in Hepworth (who play in the Sheffield and Hallamshire County League, while their reserves are in one of the Huddersfield and District Divisions) .

I got to the ground about 20 minutes before kick off and found myself stood on the elevated decking of the club bar. A pungent whiff of ganja from a khaki tracksuit-bottom wearing local thug welcomed me. Back in the big smoke this would mean a quick exit, but this is the north where everyone’s friendly so I got an “alright pal” despite me disturbing his spliff time. A few more locals turned up and proceeded to to start dishing it out to the visiting team who have got a reputation of paying their players to play. Not a lot, but enough for it to be used as ammunition. At that point in time Berry Brow are a distant 2nd in the table behind Linthwaite.

“They can’t even buy the league, this bunch of shite cunts” hissed one of the locals. He got several distant “fuck offs” in return.

Then the same bloke shouted down to one of the subs “Fucking hell, you’re not sub are you? You’re much better than the big cunt you pay”. The bloke grinned back.

Then I heard a discussion going on “Fucking hell, I’d rather be playing against McAliskey than him”

“McAliskey eh?” I scanned the pitch and saw a big lumbering number 10. “That 10” I said to the bloke next to me “That’s not John McAliskey is it?”

I think I worked it out that it was something like 14 years ago that I saw him score the solitary goal at Whaddon Road (I was actually corrected later, it was Alan Connell). He’s 34 now.

Seems like there was a bigger turn out than usual as not many fancied the trip over to watch the firsts play Featherstone. Heard mutterings of “Fucking head kickers over there”. “Big fucking head kickers” added another. “Fucking miners as well”.

There was a slight delay before the ref was happy that he was going to get his match fee. I overheard a heated discussion with the ref saying “The last time I came here it took you half an hour to count all of the coppers” and they needed to find a pair of boltcutters as they couldn’t find the lock for one of the goals.

It was a cracking competitive game actually. No little skill and effort shown by both. The home side went in 2-1 up at half time courtesy of two free kicks and a McAliskey penalty he belted over the bar. The second half was much more even. Newsome went 3-1 up against the run of play before Berry Brow brought it back to 3-2 which made the last 10 minutes a real fight to the death. All in all excellent entertainment. Made even better listening to the Undr the cost podcasts featuring Dean Windass, Andy Griffin and Billy Paynter on the way home.

Corner with Huddersfield Town’s ground in the background 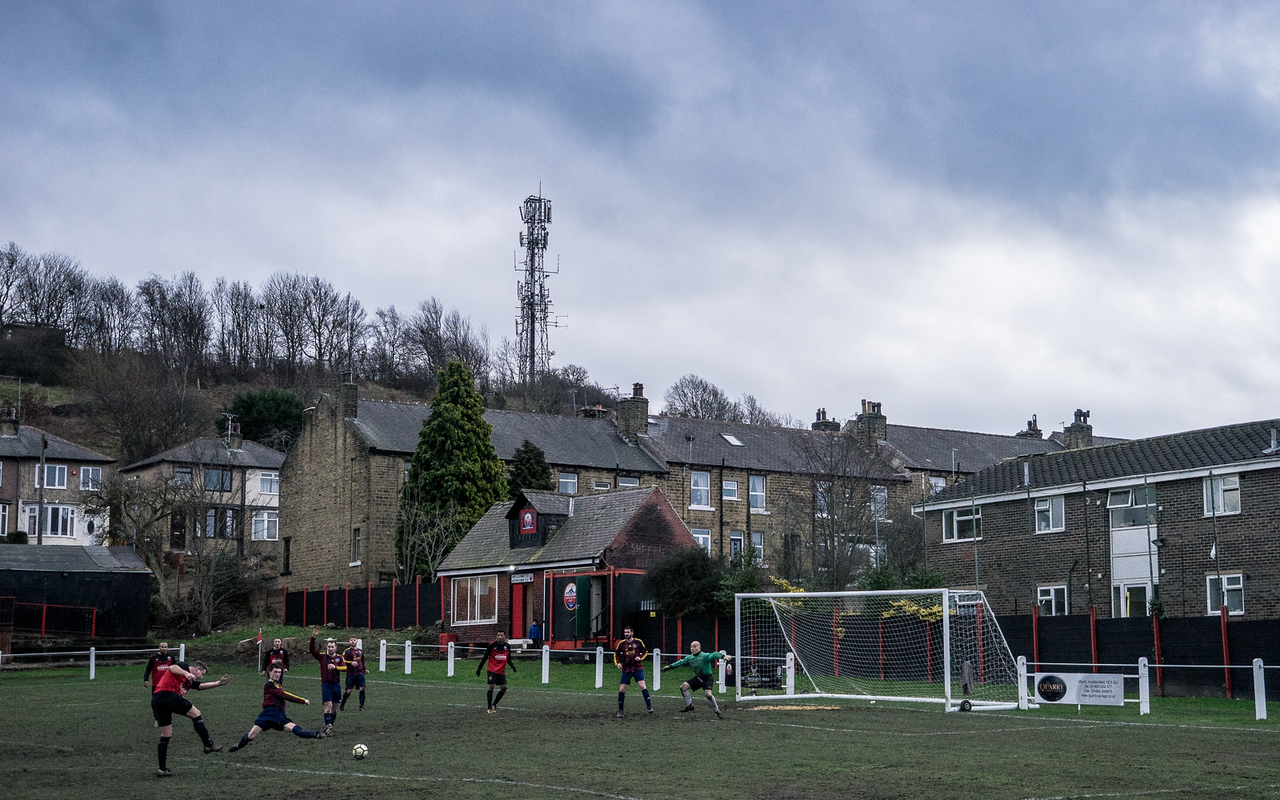